So I reached England the morning after my birthday, after having the longest birthday of my life (it lasted more than 24 hours because I crossed the international date line while it was still my birthday). Thanks for all the birthday wishes and presents! Although I'm sorry, I couldn't bring some of them with me. I simply had no space.

because it's always more interesting to do other things that you really shouldn't be doing when you ought to be concentrating on productive things.

In this case, it isn't exactly productive per se, but it certainly is worth money. I'm supposed to be marking papers but I have no mood for it.

Just completed course enrolment after an extremely stressful 45 minutes, because there was a course clash that I didn't anticipate. Made some switches, still got *almost* everything I wanted, so that wasn't too bad.

And I'm waiting for the Aug 7 6am Toronto time deadline to lapse (11am on 7 August in London) to take my last course.
POL214Y1 Canadian Politics

And that is what I carry to school most days.

I'm rather nervous waiting for my course enrolment to begin, so I've been doing rather useless and random things such as taking this.

On top of the bag is my light jacket, meant for temperatures above -5 degrees Celcius in combination with another 1 or 2 layers beneath it. The heavy one is in Toronto, I wasn't about to bring that back...

Then there is my clipboard and notebook. The clipboard cost me CAD$1.13, and I bought it because I realised after a few days that Canadian lecture halls aren't guaranteed to have those fold out table things, and when they don't, if you don't have a clipboard or a hard file, you can forget about writing properly. There's the notebook, which I buy from the university because it's relatively cheap, and has perforated pages that I can tear out since I use the same notebook for every single class I take, and tear the pages out to file when the book's finished.

Perched on top of the clipboard and notebook is my cap, or rather, one of my caps. I have also realised that if I don't wear something on my head when it's really cold outside, I stand an extremely high chance of getting a headache and then a flu from the cold because most of the body's heat is lost through the head.

And then there's some camera stuff, spare batteries and cards... a small notebook, a single pen and a single highlighter... because I have sworn off correction fluid and tape (too messy, takes too long, pointless anyway). Camera stuff goes to class with me because you won't believe the number of times there have been awesome scenes in between classes that I failed to capture because I didn't have the camera. And I hate missing things. It also allows me to go on a small photo walk if I want to after classes.

In addition, I'll probably carry a water bottle or a cup of coffee or hot chocolate, and that's about it.

I don't carry my laptop to class as I am extremely easily distracted, and if I have the laptop with me, I'll be tempted to go online or play nonsense or simply not pay attention. Besides, I remember stuff better if I write it down physically, and my notebook and clipboard is so much lighter than the laptop anyway.

And I still have 30 minutes to course selection time... 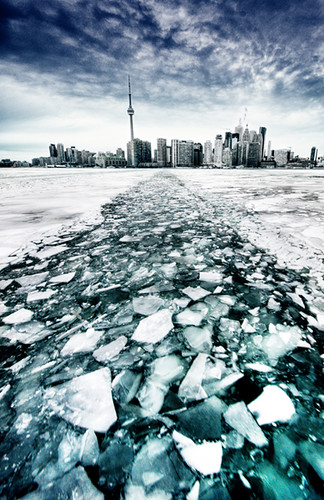 Yesterday I woke up at an extremely ungodly hour to take a really long walk down to the lakeshore, to take a ferry to Toronto Islands.

Wow, it was really, really nice. The snow and the cold has kept everyone away, so the place was pretty much deserted for most of the day. I stayed there for around 10 hours, and when I left at 4pm or so, I saw a few photographers coming in... and I was like aww too bad you missed it, because the clouds were coming in and the sun had gone.

Along the way I discovered that Lake Ontario's surface does actually freeze, and the pack ice is really cool, especially when it's covered with snow, because the contrast against the dark water is just awesome. The ferry actually forced its way through the ice, breaking it as it went through, leaving ice shards everywhere. Apparently it refreezes at night, and the next morning they have to break the ice again.

Let's just say I'll most certainly be going back, perhaps when the temperature really drops on Thursday, because other than the pack ice, there will be really nice icicles on the islands. The high for Thursday is expected to be below -20 degrees, and well, we won't go into the low. 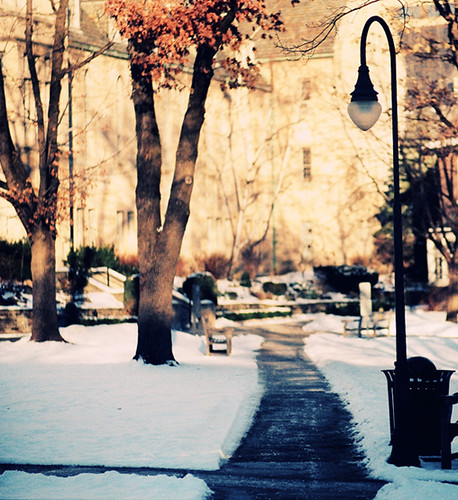 School started, and has been on for a week now.

I feel that I should be doing a lot more than I currently am, but my roommate evidently doesn't think it's time to pick up the books yet.

I started the new year by shooting 2 rolls of film as quickly as I could, and then dropping it off for development really fast too. But then, I forgot to collect it till today.


In other news, I applied for the Summer Abroad programme at Oxford University. Hopefully I shall get it and go this summer. Sounds awesome, and I worked out that it is actually cheaper than summer in Toronto, believe it or not. It helps that the pound is comparatively weak now, and expected to get weaker.

So, if you're in England this summer (especially late-July and the whole of August), let me know! I'm considering going earlier to travel a bit around Europe before starting the programme, but I've got to be back in Toronto for school second week of September.

Toronto's experiencing the first major snowstorm of the season, and I think they underestimated it... I swear there's more than 30cm of snow out there. Because just now when I trekked (yes, trekked, because it took a lot of physical effort to get there) to McDonalds to satisfy my hunger, I was stepping in way-more-than-knee-deep snow.

And well. It'll be awesome tomorrow when it stops snowing.... but meanwhile this sucks because it's caused the flights to and from Toronto to be cancelled, due to the complete lack of visibility and also the fact that they are unable to keep the snow off the runway long enough for a plane to take off or land. And this sucks even more because now my dad and bro are stranded in Detroit airport because they were on the way to Toronto to visit me, and all the flights got cancelled.

The interesting thing is the news reports all say that this pales in comparison to last year, so they're kind of happy actually.

And now here's a photo of a cute dog (think: Hamley) to remind myself that snow is actually kind of fun... when it's not being annoying in the form of a snowstorm.

I realise that my definition of 'warm' has sunk to new lows. Now I consider anything on the positive side of zero degrees to be 'warm'. And I think that 5 degrees above zero is 'hot', because I can't bear to wear my big coat out when it's that temperature.

Today it snowed again, and for some reason it was incredibly cold, with the windchill putting the temperature at 21 degrees below zero. I have no idea what the hell is wrong with the weather, because it's not supposed to be this cold at this time of the year. The 20 degree and 30 degree below zero temperatures are reserved for January and February.

Wish me luck when I get back to Singapore...

Noooo where's the snow. The temperature is definitely low enough but no snow. Only freezing rain.

Anyway, I watched James Bond the Quantam of Solace the day after it opened in Toronto. And Daniel Craig was here to promote it, but I didn't get to see him because I was too busy studying >.<

Won't spoil the movie for those who want to watch it but haven't. So just go watch and be happy.

There was a Santa Claus Parade outside my window on Sunday, which woke me up from my beauty sleep. The thing about living downtown is that everything happens right outside your window. On Remembrance Day a while back, they almost fired the canons into my window, or at least I think it felt that way. Apparently the Santa Claus Parade has been held annually since 1905 (!). It was snowing during the parade, but it was wet slushy snow, only good for getting people soaked and cold and not much else. It was really heavy though. And the rest of Ontario has been having snowstorms, but Toronto got left out.

After the snow stopped, I slipped outside to see the parade and shoot some pictures of it, and it took me about 30 seconds to get from my room to the edge of the parade. That felt good. And I think it's an ang moh kid thing - but ang moh kids are just inherently cute, and the proportion cute kids is higher.

This boy was on the Sound of Music float, and from the way he carried himself and how comfortable he was with it, I have a nagging suspicion that he is actually a cast member of the musical that's now in Toronto. But I can't confirm that, because there are simply no pictures online.

And yes, that's snow on his hat.

Back to my quest for the perfect GPA. It's exam period, sucks.

And finally, the trees are bare. It's slightly gloomy and dreary and bleak right now, and I'm highly tempted to pair the following picture up with Thomas Hardy's 'The Darkling Thrush' poem. But I need to get rid of that person for it to suit.... darn.

It's actually a reflection in a puddle in Queen's Park.

Queen's Park is the park just next to my residence, and I can view it from my window because the trees outside are completely bare. It's surprising how things change so much when the trees all lose their leaves. It feels really empty.

I suppose I'm just waiting for things to get white and stay white.